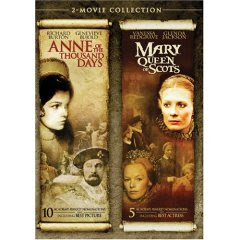 The film opens with the death of Mary’s first husband Francois II after he goes out riding. Mary is distraught and Catherine de Medici blames her for her son’s death. Instead, Mary decides to go back to Scotland to take up the throne. She is refused safe passage through English waters but determines to go anyway. Upon arriving in Scotland, she is met by her half-brother James Stewart, the Earl of Moray who has determined that Mary will be Queen in name only. Mary is perturbed to discover that there is no grand welcoming for her arrival but she takes in stride, and even manages to joust verbally with John Knox who shows up at the dock to harangue her for being a Catholic. In the meantime, Bothwell who had gone to Scotland to see Mary ends up in an English prison after his ship is taken by Elizabeth. 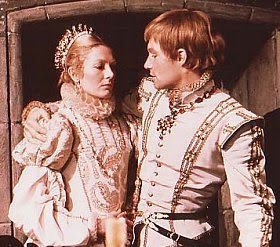 land. Elizabeth in the meantime determines that since Mary must marry, it would be to her advantage to have her marry Robert Dudley, the Earl of Leicester who is rumored to be her lover. However, Elizabeth also sends Henry, Lord Darnley, Mary’s cousin who has grown up in England as well. It is revealed that her real plan is for Mary to marry Darnley, not Dudley.

Mary and Darnley marry but almost immediately he reveals his true colors, that he is petulant and weak with a fondness for drink and other women. Mary’s love for him quickly turns to disgust. His jealousy of Mary’s secretary David Riccio leads to him becoming involved in a plot to kill the Italian. One night in the Queen’s private chambers, several Scottish nobles led by Lord Ruthven, and including Darnley, burst in and drag off Riccio, stabbing him 56 times. Mary manages to convince Darnley to help her escape. She rides off to Bothwell’s home (Bothwell finally having been freed from captivity in England), Hermitage Castle where she gives birth to the future James VI of Scotland.

Mary proves merciful to the conspirators, although she continues to deny Darnley her bed. The conspirators turn on Darnley, for having double-crossed them, and arrange to have him killed. There is a huge explosion at the house where he is living, and Darnley is later found strangled in the garden. Mary turns to Bothwell for comfort and several months after Darnley’s death, they are married. But the nobles, led by her half-brother, turn against Mary and demand her abdication. When Mary refuses, Morny tells her that he has proof in the “casket letters” that Mary was involved in the murder of Darnley. Mary is forced to sign over her rights and is escorted to the border into England. Bothwell tells Mary that he will go to Denmark to raise funds and troops to help her regain her throne.

In England, Elizabeth and Mary secretly meet. Elizabeth refuses to help Mary regain her throne and imprisons her. Years go by, and Mary has finally worn out her welcome. Elizabeth is reluctant to execute her unless there is hard evidence that is not faked that Mary has been involved in a conspiracy against her. When proof is found, Mary is put on trial and found guilty. Elizabeth visits her once again just before her execution. Mary goes to the scaffold with dignity and is beheaded.

The “Casket Letters”: These were 8 letters that Mary allegedly wrote to Bothwell. The Earl of Morton claimed to have found them in a silver box marked with the letter “F” (for Francois II)along with a bunch of other documents including Mary and Bothwell's marriage lines. These letters purportedly implicated Mary in Darnley’s murder, but Mary insisted that they were forgeries, that her handwriting was easy to imitate. The letters were also never brought forth while Mary was held captive in Scotland for almost a year. They only came to light when Mary was charged with Darnley's murder while in English custody. Historians have argued about the authenticity of these letters for centuries. Mary's current biographers, including Lady Antonia Fraser, believe that they are forgeries.

I found this movie to be incredibly disappointing. While it follows the basic outline of Mary’s story, it is riddled with historical inaccuracies, missing scenes and bland performances. While Vanessa Redgrave is an amazing actress and physically looks a great deal like Mary, the script requires her to play the role as a hysterical dimwit. The fact that Mary ruled Scotland for almost five years with little incident is completely glossed over in favor of the drama of her marriage to Lord Darnley which is poorly developed. The film also skips over Mary’s trial for Darnley’s murder when she arrived in England as well as her love for animals. Redgrave comes into her own in the final scenes as Mary is preparing for her death and the scene where she learns that her son has been corresponding with Elizabeth while he has never answered any of her letters.

The audience never sees the progression of her romance with Darnley. There is only one scene of the two of them together, riding on the beach, when Darnley falls off his horse, and Mary is distraught. We never see him or Robert Dudley arrive at the Scottish court, so we have no idea why she would prefer Darnley over Dudley. We are told it is because Dudley is one of Elizabeth’s cast-offs, and there is the suspicion that he murdered his first wife, in order to be free to marry Elizabeth. Darnley and Mary are quickly married and then Darnley reveals his true colors like on the wedding night. The film also implies that Darnley and David Riccio were lovers, which as far as I know, is a complete invention of the screenwriters. Darnley was jealous of Riccio because of his closeness to the Queen, and Riccio believed that Darnley was not fit to be King. There is evidence that they were initially friendly, but I don’t know how you make the leap from friendly to sex buddies.

Timothy Dalton portrayal of Darnley conforms to the historical record, but he is never given a chance to show the audience why Mary fell in love with him in the first place. The film spends more time setting up the Bothwell/Mary relationship. Also, Mary was six months pregnant when Riccio was murdered, she didn’t give birth at Bothwell’s castle, but at Edinburgh Castle.

The relationship with Bothwell is portrayed as a true love match. When Bothwell tells Mary he’s going to Denmark, Mary cries that she can’t live without him. The historical Bothwell was apparently not that noble, he was ambitious and wily. He’d been divorced by his wife for sleeping with her servant, and he’d toyed with the affections of a Norwegian noblewoman, Anna Tronds, who he’d been engaged to.

The film’s dominating performance is Glenda Jackson, reprising her role as Elizabeth I, that she so ably portrayed in the television miniseries Elizabeth R. Whenever she’s on screen, the film comes alive, which not a good thing when the movie is called Mary,Queen of Scots. While there is no evidence that Mary and Elizabeth actually met, I had no problem with the screenwriters concocting a secret meeting between the two. However, having two secret meetings diluted the drama. Also Mary was not escorted into England; she fled into England after having been defeated in the Battle of Langside.

While the movie was disappointing, it’s so far the only recent version of the life of Mary Queen of Scots, apart from a British miniseries called Gunpowder, Treason and Plot which focuses on Mary and her son James VI (Part One is about Mary and Part Two deals with the Gunpowder Plot), which is not available in US format on DVD. Despite the many movies and miniseries that have depicted the life of Elizabeth I in the past 30 years, poor Mary gets short shrift as a subplot. Recently it was announced that Scarlett Johansen was going to portray Mary in a new film which as yet doesn’t have a start date.

What Mary, Queen of Scots, deserves is a major miniseries even if it requires two actresses to play the role, one to portray the young Queen from 18-25 during her years as Queen, and then an older actress to portray Mary during her years of imprisonment.
Posted by Elizabeth Kerri Mahon at 9:57 AM

I found this movie kind of dry.

And I love Scarlett Johansen but I don't have much faith in the new movie being very good. I was reading an interview where she said there was a big debate on the set as to what accent Mary should have Scottish or French. ugh. I don't see how Mary could possibly have anything but a French accent?

Beautiful review, thank you. My husband hears me rumble when we watch this kind of movie with historical inaccuracies. I have lots of issues with Mary but I also agree that she is certainly due a decent movie!

Years ago I traveled to Edinburgh and stood in the small room where Riccio was murdered. It was quite an experience...

Hi Susan, I too have stood in the room at Holyrood where Riccio was murdered and I've also stood in the room in Edinburgh Castle where Mary gave birth to James. I hated the scene of Riccio and Darnley in bed. It seemed so unnecessary and wrong. She's definitely due a decent movie. She's certainly had more than enough plays, biographies and fiction written about her.

Bearded Lady, it's interesting about the accent. I would think it would be some sort of hybrid. Mary grew up speaking Scots until she was five. She didn't even learn French until she moved to France. I would think as the years progressed while she was in Scotland, her accent would have reverted to more of a Scottish one, surrounded by the nobility.

I have my doubts about Scarlett Johansen as an actress taking on a role of this complexity. While Vanessa Redgrave had a certain vulnerability in the role, I didn't see the woman that contemporaries claimed was so intelligent and vibrant. She lacked the guile needed to rule in Scotland where the nobles spent more time fighting amongst themselves than they did the English.

I just ran across your blog and find so much interesting stuff. Can't check it out all in one go so I've added you to my feed so I can find you easily again and keep up with your new additions.

Thanks Bev! I'm glad that you are enjoying the site. I hope you keep coming back!