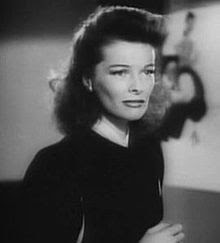 Today the United States post office releases their new stamp honoring Katherine Hepburn on what would have been her 103rd birthday. Four time Academy Award winner, Katherine Hepburn was also once labeled 'box-office' poison during her long career. With a mind and a will of her own, Katherine Hepburn has become a role model to countless women all over the world. A four-time Academy Award winner, she was nominated twelve times. Only Meryl Streep has received more Academy Award nominations. In 1999, the American Film Institute ranked her as the greatest female star in the history of American cinema. Not bad for an actress that was once labeled 'box office poison'. Outspoken, Hepburn didn't play by Hollywood's rules. She wore no make-up, escaped to the East Coast whenever she could, she had affairs with married men, and refused to play nice with journalists.  All these qualities made her the best Jo March ever in Little Women.  Hepburn was also something of a health nut, she swam, played golf, and drank gallons of water everyday. When her career in Hollywood seemed over, Hepburn retreated to the theater, starring in the hit Broadway play The Philadelphia Story which was written for her by the playwright Philip Barry. With money borrowed from her former lover Howard Hughes, Hepburn bought the film rights to the play, and maneuvered a deal with MGM for her to star in the film.

But the radiant smile hid a tragic family history of depression and suicide (several uncles and her maternal grandfather had committed suicide). Katherine Houghton Hepburn was born on May 12, 1907, the second of six children. Her father Tom Hepburn was a doctor (the family claimed descent from James Hepburn, the Earl of Bothwell), and her mother Katherine Houghton (Kit) came from a prominent New England family (Houghton Mifflin and Corning Glass works). At Bryn Mawr, Kit revealed a rebellious streak, running up outrageous bills, smoking cigarettes behind tombstones in the local cemetary, riding wildly around the neighborhood on horseback. Even marriage didn't slow her down, she became a vocal advocate for not only women's rights but she also became an advocate for birth control (she was a co-founder of Planned Parenthood), and later in life became a socialist. The Hepburns instilled in their children a sense of freedom, it wasn't unusual for Hepburn's parents to walk around in the nude, and her mother explained the facts of life to her at the age of four. According to family lore, young Kathy mulled the new information over and declared, 'Then I can have a baby without getting married. I don't want any man bossing my children!'

While her mother was out working on her various causes, Hepburn's young life was dominated by her older brother Tom and her father. Hepburn cut her hair short, dressed in her brother's clothes and called herself 'Jimmy' Hepburn grew up playing baseball, wrestling and gymnastics. A natural athelete, she later added golf, tennis, and swimming. Dr. Hepburn was a demanding parent who expected perfection from his children. Hepburn worked tirelessly to earn his approval. Unfortunately Hepburn's brother Tom suffered from chorea or St. Vitus Dance. As a physician, Dr. Hepburn should have been understanding, instead he treated his son's illness as a weakness. The constant pressure made him nervous and he had nightmares. On a trip to New York when Tom was fifteen, he locked himself in an attic room and hung himself.  The family refused to accept that he committed suicide, insisting that he had been trying out a trick that he had seen in a movie. There was no mourning, as Hepburn later said, 'What you do is to move along, get on with it, and be tough.'  To honor her brother, Hepburn took is birthdate of November 8 as her own. Suffering from depression, she withdrew from school, spending her teen years homeschooled.

From childhood Hepburn was fascinated with acting. Her aunt Edith had also contemplated an acting career. After graduating from Bryn Mawr with honors, Hepburn told her father about her plans. He was not impressed. As far as he was concerned, acting was silly, actors were egomaniacs, and the whole thing was nothing but showing off. Still Hepburn was determined to succeed, if only to prove her father wrong.  It's hard to believe that the woman who racked up 12 Academy Award nominations during her lifetime, was an abject failure during the first few years of her career. She was fired about as often as she was hired. Along the way, she married. Her husband Ludlow Ogden Smith was the opposite of her father, he was kind, patient, and loving, which meant that he didn't last long. Still, even after they split up, they stayed friends and it wasn't unusual for Smith to stay with her family at their summer home on the Long Island Sound.

By 1932, Hepburn was starring on Broadway as Antiope, an Amazon princess in The Warrior's Husband, where her entrace in a short costume, carrying a stag on her shoulders garnered her plenty of attention. Demanding $1,500 a week, Hepburn assumed that the studio would say 'thanks but no thanks.' To her surprise, they said yes even though the production head David O. Selznick insisted that she had absolutely no sex appeal. Hepburn scandalized the studio by showing up on the lot wearing jeans. This was in an era when stars never left the house without full hair and make-up.  When Hepburn's jeans disappeared from her dressing room, she threatened to walk around the lot in her underwear. When they didn't reappear, Hepburn made good on her threat. The jeans soon made their way back to Hepburn. Hepburn was no fashion plate. Journalist Adela Rogers St. John wrote that her clothes were 'the most appalling and incredible I have ever seen in my life. They looked like something.......for the Mexican army to go ski-jumping in.' More often then not, Hepburn's clothes were baggy and ill-fitting, comfortable for her lifestyle but not for Hollywood.

Although Hepburn never married again, preferring her independence, she seemed to be fatally attracted to dark and difficult men like Howard Hughes (suffered from OCD), John Ford and Spencer Tracy. Hepburn and Tracy were companions for almost thirty years. Hepburn had wanted Tracy to star in The Philadelphia Story with her, but the studio insisted on Cary Grant and James Stewart. Their first film was the romantic comedy Woman of the Year. The story is that when they met, Hepburn was wearing heels that made her considerably taller than Tracy.  Hepburn reportedly said, "I'm afraid I'm too tall for you, Mr. Tracy" to which director Joe Mankeiwicz is said to have replied, "Don't worry, he'll soon cut you down to size."

The two actors made 9 films together. When Tracy was an alcoholic who went on binges where he would drink steadily for two weeks straight. When Hepburn went away to make a film, he would either binge drink or indulge in affairs with other women. The two never lived together, but Hepburn would often sleep outside his room when he lived at the Beverly Hills Hotel, or in another room when he finally moved to a cottage at George Cukor's house. Hepburn worshipped Tracy, considering him the finest American actor on film. For five years, she didn't make a film, so that she could take care of him before their final film together, Guess Who's Coming to Dinner. After his death, she didn't even attend the funeral, discreet to the end. It wasn't until years later in her autobiography that she definitively confirmed their relationship.

After his death, Hepburn moved back East and kept busy working in films and television. She starred as Coco Chanel in a Broadway musical and won two more Academy Awards for The Lion in Winter and On Golden Pond. When most actresses were slowing down Hepburn was still working and doing interesting work.

Hepburn finally passed away at the age of 96 on June 29, 2003.  To honor her, a theater was built in Old Saybrook, CT where she spent many years called the Katherine Hepburn Cultural Arts Center and Theater. Her alma mater, Bryn Mawr has also launged the Katherine Houghton Hepburn Center which is dedicated to both her and her mother.

Heart of the Wood said...

Oh she was wonderful! What is that word in The Philadelphia Story? She was yar!

sorry to have been awol rather a lot! Well told bio again; the line between creative genius and psychotic lunacy can be very fine. (Hepburn, not you, or me, I hope)

Thanks! she's one of my personal favorites.

Jacqueline Gerber aka WCLV's "Queen of the Morn" said...

FYI -- The Kent State Museum, a fashion museum in Kent, Ohio, was given Katharine Hepburn's performance clothes by her estate. They're going on display in October 2010.

She was one of my favorites too, and left big shoes to fill.

Nice article, enjoyed reading it all, even though I knew most of it.

That's so exciting about the exhibition. That might even be worth a trip to Ohio.

This is a great tribute post! I hadn't ever read anything about her parents, so it was really interesting to learn about them. I think I've seen all of her films, but I should double check. When I was in high school she was my favorite actress and I went on a binge watching her movies. (It didn't hurt that our library was starting their video collection at that time and the librarian must have been a fan because there were a lot of her films in the collection.)

I should really get a hold of a copy of her autobiography.

she was so admirable! i loved them in guess whos coming for dinner and it feels more special now having read the little history

Hello blogger I suggest you read Me, Katharine Hepburn's autobio, so as to be credible in your next blog about Kate :) no pun intended