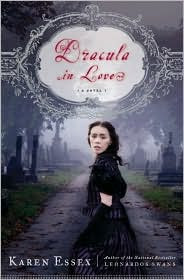 I have been a fan of Bram Stoker's DRACULA, ever since I first read the book in high school. And I've seen pretty much every adaptation known to man including the last BBC miniseries that had Dracula as a cure for syphilis (don't ask, it didn't make sense to me either. Something about him draining the nasty syphilitic blood and replacing it with his blood). My favorite will always be Frank Langella in DRACULA based on the Balderston and Deane play. So I'm pretty particular about other adaptations of the book. As an old friend once said, "if it ain't broke," but I jumped at the chance to review Karen Essex's DRACULA IN LOVE because I'm a huge fan of her previous books. I'm happy to say that she didn't disappoint me, and in fact exceeded my expectations.  The book is being touted on the back cover as TWILIGHT for grown-ups, which is almost an insult, because it is so much better than that and better written (I'm not a huge Twilight fan although I can just imagine the T-shirts saying Team Jonathan and Team Dracula!). Just look at that fabulous cover, a woman in a gorgeous Victorian dress, running through a graveyard,  with a look of fear and anticipation on her face. This book will send shivers up and down your spine and in a good way.  Lush, mysterious, and unabashedly sensual, Essex pulls out all the stops and actually, in my opinion, improves on Stoker's novel.

WARNING:  I plan on gushing like a crazed fan girl about this book without hopefully giving away any spoilers. The book is narrated solely from Mina Murray Harker's POV, unlike the original book which included multiple POV in diary entries. The book is Mina's journey from the somewhat conventional Victorian woman in the beginning of the book to a woman who is a little more aware of herself and her power at the end of the book. Essex mentions in her Author's Note that Stoker's novel can be seen as a 'cautionary tale against the unbridling of female sexuality at the end of the 19th century.' When Stoker wrote the novel, women were finally beginning to acquire higher education and agitating for political rights. Essex turns this notion upside down and explores what is really going on behind men's fears of women. She also delves a bit deeper into the mythological background of Stoker's novel.

At first all Mina Murray wants is to create the family that she never really had with Jonathan, buying a little house in Pimlico and having two children, the Victorian dream. Mina has secrets however, the biggest being that she sleepwalks which gets her into a dicey situation at the beginning of the novel when she awakens outside away from the school where she teaches about to be raped by a stranger. She's rescued by another stranger, although one who is familiar to her. Her other secret is that as a child she could talk to animals, and hear people's thoughts, talents which appalled her parents who stuck in her in boarding school in England. Essex grounds Mina by having her come from Sligo in Ireland (the same part of Ireland that Stoker's mother hailed from).

The biggest change in the book is Lucy's story.  I had several WTF moments while reading but as it progressed, I totally got what she was trying to say about ways in which Victorian women are punished for having what we would consider today normal sexual desires.  Seward and Von Hesinger as he is called here are not heroes in DRACULA IN LOVE, far from it, which is another change that might spook readers who love the original novel. They are not necessarily villains either.  There is no black and white in this book as much as there are shades of gray, particularly in Jonathan Harker.

Jonathan starts out as a traditional Victorian gentleman, although one with more modern sensibilities than the average Victorian man. He's willing to consider new ideas and new thoughts, but he's challenged throughout this book to live up to those expectations. Mina has to face some harsh realizations about her fiance as does he about Mina. It's how they deal with these revelations, and whether or not they can go forward that are some of the most intriguing things about DRACULA IN LOVE.  Jonathan is not the innocent being preyed on by the women in Dracula's castle, the way he is portrayed in Stoker's book. Mina is no innocent either, she makes choices that might startle readers who are familiar with Stoker's tale. And what about the Count himself?  Well he's definitely not the bad guy that he's portrayed in Stoker, nor is he a good guy. He's just a man in love with a woman that he's waited centuries for, who he will do anything to have.  I found myself sympathizing with Dracula. Mina, the woman he has loved forever, has made choices throughout the centuries that have torn them apart.  By the end of the book, I wasn't sure who I wanted Mina to be with. With Dracula, she would have an adventurous life, full of travel and danger what with people wanting to cut off his head or trying to stake him.  With Jonathan, it would be a more placid life but no less valid.

The scenes that are the most horrific in this book take place at the asylum where Dr. Seward and Von Hesinger work. There is no Renfield eating insects, no mention of 'Children of the Night.'  The asylum that Essex depicts has mainly female patients. Yes, female. Back in the Victorian era, a man was allowed to dump his wife there for no reason other than she was unruly, thought for herself, committed adultery and a host of other reasons. That's not to say that there weren't people who were seriously mentally ill in asylums but the cures were often worse than the illness. Essex gives us vivid descriptions of the so-called 'water cure' which is nothing really but torture. Seriously it sounds suspiciously like water boarding, a method of torture that has been in the news over the past few years.

Essex adds an interesting new character, Kate Reed, who is another friend of Mina's. While Mina is focused on creating the family that she never had with Jonathan, Kate is a prototype of George Bernard Shaw's 'New Woman," an investigative journalist making her way in a male dominated world. She senses in Mina that there is more to her than just the traditional Victorian female facade that she presents to the world. In a sense, Mina, Kate, and Lucy are three archetypes of Victorian womanhood, and all three end up being punished in a sense for stepping outside the proscribed boundaries of the 19th century.

Verdict:  Hie thee to a bookstore in August and pick up a copy of DRACULA IN LOVE
Posted by Elizabeth Kerri Mahon at 10:32 AM

I am dying like a dying thing to read this book. Your gushing makes me even more hot to get it!!!

I just finished Dracula My Love which has a strong first half but then goes down hill the second half. You're review looks like I will like this Dracula re-telling, which I have in my TBR pile.

Hi Katie, I hope you like Dracula in Love, the book is like the best high. I can be extremely critical about books and I adored this Karen's retelling.

Audra, I hope that you enjoy it when it arrives. I stayed up all night finishing it.

Hi, I'm so excited to learn about your blog. I love Karen Essex and I love Dracula (Frank Langella ROCKS) so I'm definitely having a fan-girl moment. I will definitely be picking this book up.

gush away! Anything that could bring back the feeling that I got when I first read Dracula is worth a good gush. Love the cover. Karen Essex is one of my favorite authors so this one is an easy sell.

I agree 110%!! This book was amazing. It does say "Twilight" for grown ups and it is so much more than that. It's vampire book yes, but there is love, lust, mystery, suspense...so much more than a twilight book. The author did an amazing job with the details. Not only did I feel like I was there with Mina throughout the book, at times I felt that I could see, hear and really feel the surroundings. When Mina was given the water treatment in the asylum, the words and descriptions were so real I felt the chills and the suspense on my body as if it was me. When Mina was being "haunted" by the count and they had their erotic "sexcapades" I felt the heat in my body rise and wish that I could be Mina for that time. This is not your typical read one chapter before bed story... it's a book that will keep you up until all hours of the night just so you can know what is going to happen to Mina next. There are so many twists and turns, you have to be ready for anything!

Karen picked a classic and made it her own. I truly enjoyed the read. I have been describing it as dark, sensual and alluring and it could not be more this description.

Yeah, I'm so glad that people are liking this book! And I agree with you Jenna, she did make this story her own. I think that it deservedly can stand along side Stoker's novel.

I completely agree. I think Karen made this story her own. It's a dark tale with many twist and turns. Some that you can anticipate and others you don't. It has all the elements you love in a book, love, drama, suspense and so much more. A great read!!

I'm in the midst of reading Dracula My Love by Syrie James which I will be reviewing next week. I wish that she had taken more risks with the story like Karen.

Hi,
If you are interested about Dracula's story, we are inviting you to our website to find out more about Dracula's life and view the list of protection kit against vampires, original spells and other more about Vampires. Please visit http://www.spellsofdracula.com