The French Sultana: The Legend of Aimee Dubucq de Rivery 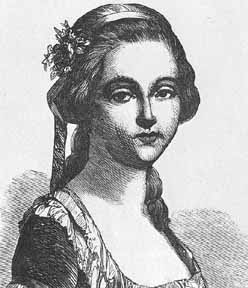 On a dark, sultry night, the scent of the lush bougainvillea and frangipani filling the air, two young girls barely in their teens, cousins, one slight and skinny, the other with hair the color of moonlight slip away from the plantation house where they live. The velvet caresses of the night breezes stir their hair as they creep into the surrounding jungle, giggling at how they have eluded their guardians. They make their way past the swaying vines, entering into an eerie and mysterious world, no light but the fireflies to guide them as they pick their way to the tumble down shack of the conjurer woman who will hopefully tell their fortunes. Both girls know that they will get into trouble if their families know where they have gone, but the urge to know their future is too great.

In the shack they find an elderly black woman of indeterminate years wearing a red turban and crouching on a filthy mat. Frightened and nervous, the two girls hold hands tightly as they tell the woman what they seek. The dark haired girl is the first to have her fortune told. The woman tells the girl that her fortune lies across the sea in France; there she will marry a blond man meant for another in her family. A native of Martinique, he will perish in a tragic manner, she will be left with two children, but fortune will smile on her again, because she will marry a second time to a dark haired man, with an unpromising future. Nevertheless he will wield great power, he will be celebrated and fill the world with his glory. After having astonished the world, she will die unhappy wishing that she had never left Martinique.

The other girl passes the woman coffee grinds to have her fortune told. Euphemia tells her that her fate too lies across the sea, that she will be captured by pirates and taken to a foreign land, where she will give birth to a son, who will one day rule a great country, but his path to the throne will be reddened with the blood of his predecessors. She will never enjoy the public honors of the court but will occupy a vast and magnificent palace which she will command. At her happiest moment, she will die.

These two young girls were Marie Josèphe Rose Tascher de La Pagerie, soon to be known to history as Josephine Beauharnais, Josephine Bonaparte, and the Empress Josephine. The other young girl was her cousin Aimée Dubucq de Rivery who would one day become the mother of the Sultan Mahmud II. This is a story that has been debated over the last two centuries. Was the Nakshedil Sultan Aimée? Unfortunately there is no evidence that the legend is true.

Aimée’s story owes a great deal to a chapter in Lesley Blanch's 1954 book The Wilder Shores of Love which was based on an earlier biography called The Veiled Empress by Benjamin Morton. Aimée’s story reads like part historical romance, part political thriller, and part adventure story. The real Aimée was born on Martinique in 1763 (Wikipedia says 1776) of noble Norman stock. Her father died soon after she was born, her mother when she was six, and she was adopted by relatives. In 1776, she was sent to France to complete her education at the convent Dames de la Visitation, a sort of finishing school for the daughters of the nobility where she learned all the polite accomplishments expected of her. She spent eight years at the convent, unable to return home to Martinique due to the war between France and England.

Blanch’s book details how Aimée was kidnapped on her way back to Martinique from the convent in Nantes by Algerian corsairs (after being rescued from her original sinking ship by a Spanish privateer). When the Dey of Algiers catches a glimpse of Aimée's beauty, blonde hair, pale skin, and large blue eyes, he realizes what an incredible prize she would be. Sending her as a gift to the Sultan of the Ottoman Empire, Abdul Hamid I would score him major brownie points.

As soon as Aimée arrived in the Seraglio, the place where the Sultan’s harem is kept, she enters into a whole new world. The Seraglio held hundreds of girls all hoping to catch the Sultan's eye, and to bear him a son. Since the throne was passed to the nearest male relative and not from father to son, there was an awful lot of poisonings and accidents as women jockeyed to have their son become the next Sultan. The woman ho became the Valideh Sultan could wield an enormous amount of power. She was soon caught up in the political infighting between the Circassian Kadin, mother of Abdul Hamid’s nephew and heir Selim, and the mother of his son Mustapha who are backed by the powerful Janissaries. Realizing that she has no chance of being rescued, Aimée throws her lot in with Selim’s faction, becoming his confidante. She also became a favorite of the Sultan after graduating from the Académie de l’amour with flying colors. Blanch writes an affecting scene of Aimée freaking out on the day that she’s called to the Sultan’s bed. Selim’s mother calms her down, and reminds her of her duty. Aimée gives birth to a son Mahmud, cementing her place in the Sultan’s favor, becoming a Kadin or wife. She is given the name Nakshedil which means ‘Beautiful One.’

After Abdul Hamid’s death in 1789, his nephew ascends the throne as Selim III. According to the legend, it was because of Aimée’s influence that French engineers were employed at the artillery school, one of who might have been Napoleon if he hadn’t pissed off the wrong people. A strong French influence began to pervade Turkey. Ships were built according to plans used by the French navy. For the first time, a Turkish ambassador was sent to the French court, and a French language newspaper was started. Unfortunately Selim was assassinated by the Janissaries in 1807 who disapproved of his liberalism. Mahmud was saved by his mother who concealed him in a furnace. After Mustapha was deposed and killed, Mahmud became Sultan fulfilling the prophecy related to his mother. In 1817, Aimée died, the legend says that on her deathbed, she asked for a prist to perform the last rites. For the first time, a Catholic priest passed through the gates of the Seraglio, to perform the Holy Sacrament before her death.

That is the legend of Aimée Dubucq de Rivery. Nobody knows or probably ever will know whether or not Aimée was Nakshedil Sultan. Benjamin Morton in his biography Veiled Empress lists no sources. The story of a French Sultana had been around since the 16th century in Turkey helped by the fact that since the Sultan could not have relations with his own people, all of the women in the harem were either captured or recruited from foreign lands. We know very little about the mothers of the Sultans apart from a few like Roxelana. However, according to Wikipedia,  historian, Dr. Fikret Saracoglu has found documents in the Topkapi Palace that state that Nakshedil was Circassian, that her family came from the Caucasus region in Georgia. What happened to the real Aimée? That is the $64,000 question, perhaps she was really kidnapped by Corsairs but if she was, she didn't end up in Turkey.

Whoever the Valideh Sultan during this period was definitely western and French influenced. She was said to have given both Selim and Mahmud French lessons and decorated the palace in a rococo style which was popular in France at the time. Some historians believe that if Aimée was not Mahmud’s mother, then perhaps she was his stepmother. Mahmud’s son Abdul Aziz and Napoleon III helped to keep the legend alive for their own purposes when they met in Paris in 1867. For Abdul Aziz, he used the claim to bolster his position against the predatory European powers. For Napoleon III it was a link to his grandmother.

So if the story isn’t true why has it continued to hold sway over the imaginations of writers for the past two centuries? Because it’s a damn good story that’s why! You have everything, a young virgin kidnapped by pirates, who is plucked out of the harem by the Sultan and gives birth to a son who then becomes the Sultan himself after surviving an assassination attempt. The young girl then becomes the power behind the throne. Add to that a kinship to the wife of the French emperor and you have a best seller. It’s no wonder that at least nine novels and one movie (Intimate Power starring F. Murray Abraham and Maud Adams) in the past forty years use the legend of Aimée as inspiration keeping the legend alive for future generations.

Isom-Verhaaren, Christine, "Royal french Women in the Ottoman Sultan's Harem: The Political Uses of Fabricated Accouonts from the 16th through the Twenty-First Century," Journal of History.

The Veiled Sultan by March Cost (pen name of Margaret Mackie Morrison) (NY: Vanguard Press, 1969)
Sultana by Prince Michael of Greece (NY: Harper & Row, 1983),
Seraglio by Janet Wallach (NY: Nan A. Talese, 2003),
Valide by Barbara Chase-Riboud
The Janissary Tree by Jason Goodwin (NY: Farrar, Straus and Giroux div. of Macmillan, 2006),  not just about her, but she is a major character
The French Odalisque by Sean Graham (London: Orbach and Chambers, 2009)
Posted by Elizabeth Kerri Mahon at 10:08 AM

I love this post although I will continue to believe that Aimée was captured by pirates! I hope you don't mind but I have linked to it on my blog - http://madameguillotine.org.uk/2010/08/03/aimee-dubucq-de-rivery.

I put you on my twitter account since were both New Yawkers lol. I discovered Jane Digby last night! I found you're blog after doing a keyword search for Jane Digby, this is a glorious blog worthy of great reflection. I have bookmarked you. Please keep up the great work.
Peace,
William in NY
wholland68@yahoo.com
wjholland.wordpress.com

Ah, thank you William! Jane is one of the most intriguing stories that I have ever read, and unlike Aimee, it's all true!